Although China has been leading environmental progress domestically, it is bankrolling up to 60 proposed coal power plants in Asia, Europe, Africa and South America, and together they’ll emit as much CO2 as all of Spain. 11 of these coal plants are in Africa: 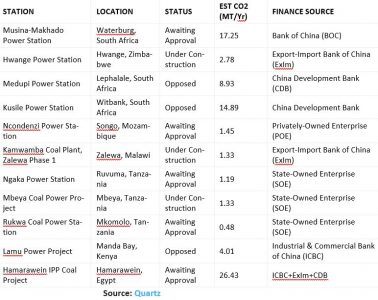 Many countries, especially in Europe, are moving towards more sustainable power solutions. China itself has been working to reduce air pollution in the country, with a target set by President Xi Jinping to cut coal’s share of the country’s total energy capacity to 50% by 2030.

There is a different trend abroad. More than 70% of all coal plants built today are reliant on Chinese funding. Since 2013, China’s Belt and Road Initiative (BRI) has committed over USD $50 billion in state finance to building 26.8 Gigawatts of overseas coal facilities across 152 countries.

There is evidently much need for power generation across Africa, but coal may be regressive way to go about it. At the recently concluded UK-Africa Investment Summit, UK Prime Minister, Boris Johnson, acknowledged that many African countries are on the frontline of climate impacts and biodiversity loss. To this end, he committed to end new direct official development assistance to thermal coal mining and coal power plants overseas.

“There is no point in the UK reducing the amount of coal we burn if we then trundle over to Africa and line our pockets by encouraging African states to use more of it,” he said.

Locally, the African Development Bank (AfDB) decided not to fund a coal-fired power plant project in Kenya and has no plans to finance new coal plants in future. Dozens of top banks, insurers and development finance institutions are also restricting coal investments, as climate activists and investors voice growing concerns about the impact of burning fossil fuels, particularly coal. Africa needs to take environmental concerns seriously and should focus more on renewable energy sources and move quickly away from coal powered projects.