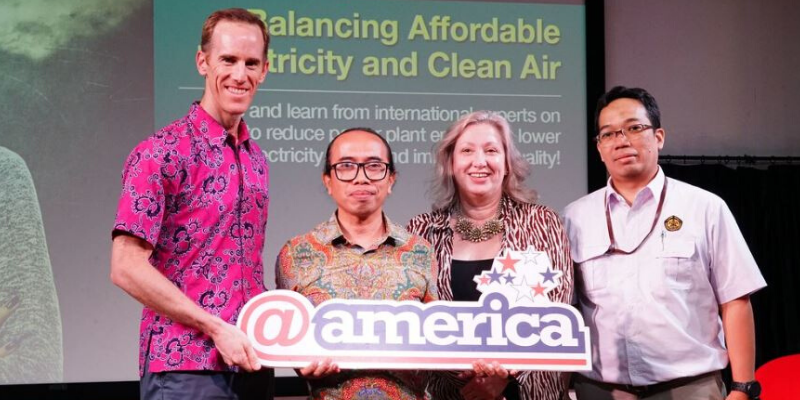 Jakarta is one of the wildest cities on the planet – almost 10 million people who, it would seem, are all trying to drive through the centre of town at the same time. It can take over an hour to travel 5km – I know, because I did it. Twice. But despite this, the population of Jakarta are the some of the friendliest and most enthusiastic people I have ever met.

I was in the city for the US Embassy launch of a new project with stakeholder engagement with everyone from government and ministries through to regulators, utilities, power companies and NGOs. And it was a delight to find representatives of all these sectors at the launch event last Wednesday – all fully engaged and chatting openly about the mutual goal of reducing emissions. Whilst the utilities are certainly not overjoyed at the tightening emission limits, there were no arguments over whether the limits were necessary. Their concern was more with the technical challenge of meeting the new limits and, perhaps more predictably, with the question of cost – and who would ultimately pay. But these are the same questions the industry has faced many times over the past decades and will continue to do so as we move away from conventional coal combustion to HELE systems and decarbonisation. And I, on behalf of the IEACCC and the US Department of State (USDOS), was there to announce that help was on its way.

The IEACCC will shortly be publishing the details of an exciting new set of projects funded by the USDOS. The projects, to be completed over the next three years, focus on capacity building to reduce emissions of mercury from the coal power sector in India and Indonesia. The two regional projects are complementary but a little different in their approach. The first project, launched in Jakarta, Indonesia last week, will focus on helping to move the national action plan (NAP) under the Minamata Convention into action.

Indonesia ratified the Minamata convention in September 2017. This commits the country to two challenges:

The mercury challenge in Indonesia is an interesting one – the mercury content of Indonesian coals is often lower than that in other coals. However, the use of coal in Indonesia is expected to almost double between 2017 and 2026. And so, in the absence of any targeted action, the emission of mercury will also double in this period. The aim of this new project is therefore to evaluate mercury emissions from the growing coal sector in Indonesia and to identify the most cost-effective means of decoupling mercury emissions from this upward growth. To this end, the IEACCC-US DOS project includes the following:

The project will commence by focusing on evaluating emissions from the coal sector in Indonesia on a plant-by-plant basis. This is not to name-and-shame the best and worst plants, but rather to identify plants with the greatest potential for effective and significant mercury reduction. The results from this first phase of study will be presented in Jakarta in September this year at a somewhat modified and expanded MEC (Mercury and multi-pollutant emissions from coal) meeting. Details of this event, and of the US DOS project in Indonesia, will become available on the IEACCC website in due course. 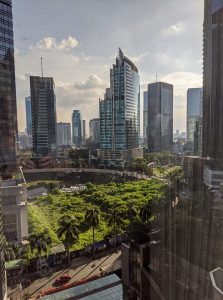 This photo from my hotel room in Jakarta is showing a tiny bit of real jungle in the midst of a veritable concrete jungle. The top photo is from the public event held by the US Embassy as part of their @America outreach facility at the Pacific Place Mall in Jakarta.