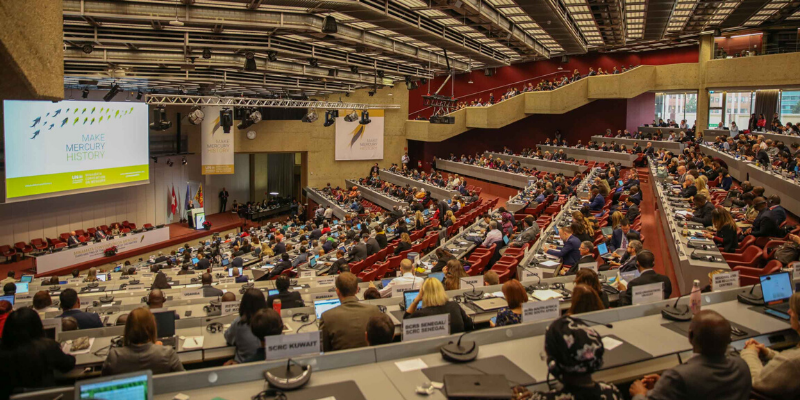 The COP (conference of the parties) of international agreements such as the Minamata Convention on Mercury are … well, weird. Bringing most of the nations of the world together in one room to reach consensus on anything is a challenge.

There is then the added complexity of dealing with a single element which appears in the focal areas of fields as diverse as fisheries, dentistry, power production, gold mining and even face whitening creams. With 128 ratified parties to the Convention all wishing their own concerns to be heard, the discussion can become random very quickly. For example, much of the first afternoon of the plenary this week concentrated on the placement and/or removal of a set of parentheses in the general text. The text of concern related to how to officially determine consensus within the parties. Ironically, no consensus was reached on how to determine consensus and the issue has been deferred to COP4. Less than an hour later, we were debating the feasibility of a phase-out date for dental amalgam – some countries hoping to agree a global target date of 2024 whilst others argued that amalgam was still necessary. Then, almost out of the blue, someone raised a new issue, never mentioned in any previous meetings, relating to up to 20 t/y of mercury which may be released globally as propellant for satellite launches. Since plenary debate cannot cope with this random diversity in an efficient manner, the afternoons are dedicated to “contact groups” – break-out meetings which allow concerned parties to focus on important subject areas individually. These side-meetings are dynamic and intensive, hence the appreciation of all delegates of the daily delivery of convention-branded chocolate, courtesy of our hosts, the Government of Switzerland (see photo). 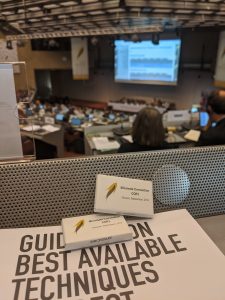 It is relatively early days for implementation of the Minamata Convention, which only moved through ratification in 2017. Only 46 countries have their NAPs (National Action Plans) finalised and published on the convention website www.mercuryconvention.org.  So far, most of these countries have prioritised mercury control and/or its elimination in products and waste. Many are focussing on strengthening their legal frameworks and institutional capacity in preparation for the development of wider mercury emission reduction policies. For the moment, emissions and releases, including mercury emissions from the coal combustion sector (the second largest source of mercury from human activities) remains quite far down the priority lists. Although this may be surprising to some, the reason is fairly simple – some sources are easier to control than others. Mercury use in medical equipment and dental practices can be controlled efficiently and completely from the top down if governments set relevant and prescriptive national legislation.

Emissions from coal combustion are harder to target as they require an evaluation of the situation (mercury emissions from coal plants are highly variable) and a determination of the cost of compliance. Some countries will prioritise the delivery of power to growing populations over emission reductions.

Claudia Ten Have, from the Secretariat of the Minamata Convention, emphasised this issue at the Partnership Advisory Group meeting, held in advance of COP3. She noted that the Minamata Convention is not just a chemical convention but rather is more of a sustainable development convention which affects many areas of policy and therefore must consider economic and strategic energy security priorities as well as environmental concerns. This is reflected in the challenge faced by experts within the Coal Partnership area to convey the concept of cost-effective mercury control from coal-fired utilities to regions where coal use is still on the rise.

The IEACCC has led the Coal Partnership Area, supporting the Minamata Convention, since 2007. In this capacity, we have made our expertise available in the form of sharing reports, running the annual partnership area meeting, and, here at COP3, providing a side-event summarising the challenge of mercury emission monitoring and control for coal plants, especially in emerging Asia. The IEACCC have already managed seven inventory projects on behalf of the UN Environment Programme in emerging regions (China, India, Indonesia, Russia, Thailand, South Africa and Vietnam) which characterised emissions from the coal utility sector and which have led to real results, including a demonstration project in Russia and the establishment of new emission limits for mercury for coal-fired plants in Indonesia. Further IEACCC project work, on behalf of the US State Department, in India and Indonesia is currently being scoped. More information will be given on this in early 2020.